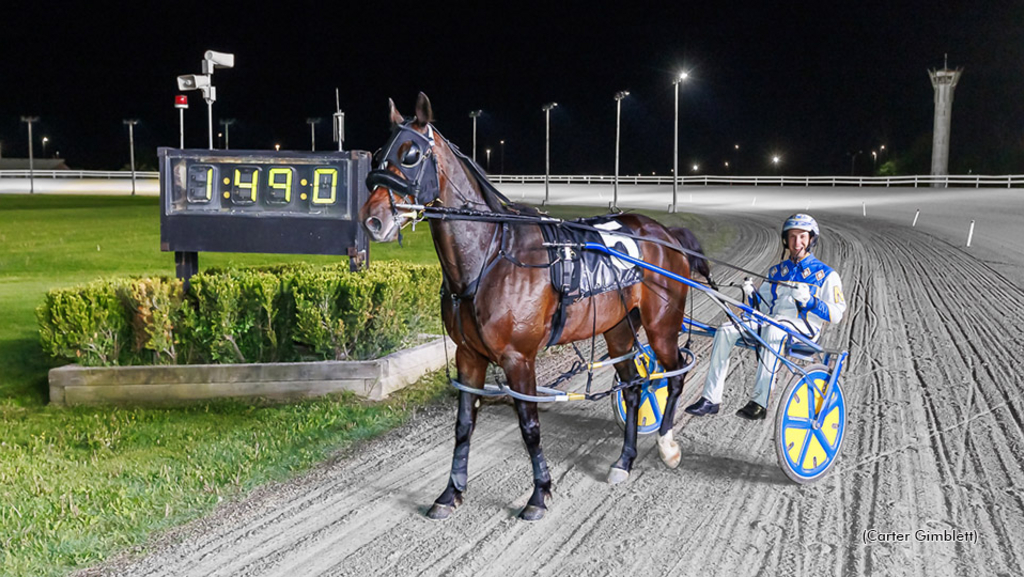 Story from Standardbred Canada (22 May)

The inaugural edition of the $273,500 Charles Juravinski Memorial Cup was a race for the history books as Linedrive Hanover (BETTING LINE) blazed around Flamboro Downs’ half-mile oval to set a new all-age track and Canadian record on Sunday evening. Looking for his fifth win on the card, the hot-handed James MacDonald sent Linedrive Hanover to the lead from post five into a :27 opening quarter with elimination winner and reigning Horse of the Year Desperate Man (Trevor Henry) gunning off the gate from the outside to secure a pocket trip. It didn’t take long for the favoured Bulldog Hanover (Jody Jamieson), fresh off his 1:49.3 divisional track and Canadian record performance in last week’s elimination round, to make a move from third. He swept up to press Linedrive Hanover approaching the midway mark in :55.

However, Linedrive Hanover forged on to three-quarters in 1:22 leaving Bulldog Hanover hung out up the backside with Lous Pearlman (Yannick Gingras) behind the stalled cover and Charlie May (David Miller) forced to go three-wide. Turning for home, it was Desperate Man who posed the biggest threat as he launched from the pocket, but Linedrive Hanover blazed home a winner in a career-best clocking of 1:49 flat to become Canada’s fastest pacer on a half-mile track.

The time of the mile knocked one-fifth of a second off the Canadian record on a half-mile track set by This Is This Plan at Hippodrome 3R in 2019. It also bested SOMEBEACHSOMEWHERE’s 1:49.2 all-age track record that the Hall of Famer set as a three-year-old in 2008.

Linedrive Hanover, who just missed by a head to Desperate Man in the eliminations for his only loss in a dozen starts this year, paid $6.80 to win as the 2-1 second choice. Desperate Man, off at 18-1, settled for the runner-up role on this night with 40-1 second tier starter Dean B Hanover (Jordan Stratton) third, five lengths in arrears.

“He was awesome,” said MacDonald after the race. “He was coming a million on the end. I had to check him a couple times and then anyone that followed after the wire… he doesn’t know where the wire is. He’s still a really green horse, just learning how to race. I was really confident going in, but I knew I needed to find a great trip and the trip I got, I couldn’t ask for a better one.”

The lightly raced BETTING LINE-Lillian Hanover (WELL SAID) gelding, who has finally had a chance to show his talent on track after recovering from a bone bruise as a two-year-old and a fractured tibia as a three-year-old, is trained by Anthony Beaton for West Wins Stable of Wellington, Florida, McKinlay & Fielding of Toronto, and Mac Nichol of Burlington, Ont. More than doubling his bankroll, Linedrive Hanover boasts $265,200 in purse earnings and is now 11-for-13 lifetime.