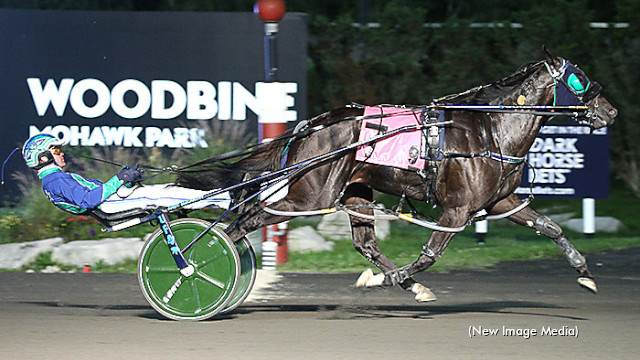 ABUCKABETT HANOVER won his first Grand Circuit final in more than a year as he crushed his harness racing rivals in the $176,815 Simcoe Stakes for sophomore pacers on Saturday at Woodbine Mohawk Park.

Under orders from regular driver Andrew McCarthy, the son of BETTING LINE tucked in sixth from post seven while Bettor Sun (Doug McNair) trudged to the lead in a :26.4 opening panel. McCarthy followed Highlandbeachsbest (Louis-Philippe Roy) to the outside at three-eighths, and the pair quickly gave the leader cause for worry as the former found the front at the half in :54.4.

ABUCKABETT HANOVER, now uncovered, quickly overwhelmed Highlandbeachsbest and advanced to the lead by three-quarters in 1:22.1. The colt then ran up the score on his rivals as he cruised to a four-and-a-half-length victory in 1:49.1.

“He definitely needed that tonight. He’s had a lot of bad luck. He got taken out in the Meadowlands Pace (interfered with and broke stride) and things haven’t gone right since,” McCarthy said. “I think he knows what his job is. A nice win like that will definitely do him some good.”

ABUCKABETT HANOVER improved his career record to 10-for-25 with the victory and upped his bankroll to $432,072. Tony Alagna trains him for Crawford Farms Racing of Syracuse, Alagna Racing LLC of Manalapan, and Jablonsky Held Stable and Barbera N Wienick Stable of Deer Park. The colt has won an overnight race, two Pennsylvania Sires Stakes divisions, and eliminations of the Messenger and Adios this season. His last Grand Circuit final win was a seven-length romp in the Champlain on Sep. 12, 2020.

by Nicholas Barnsdale, for Harnesslink