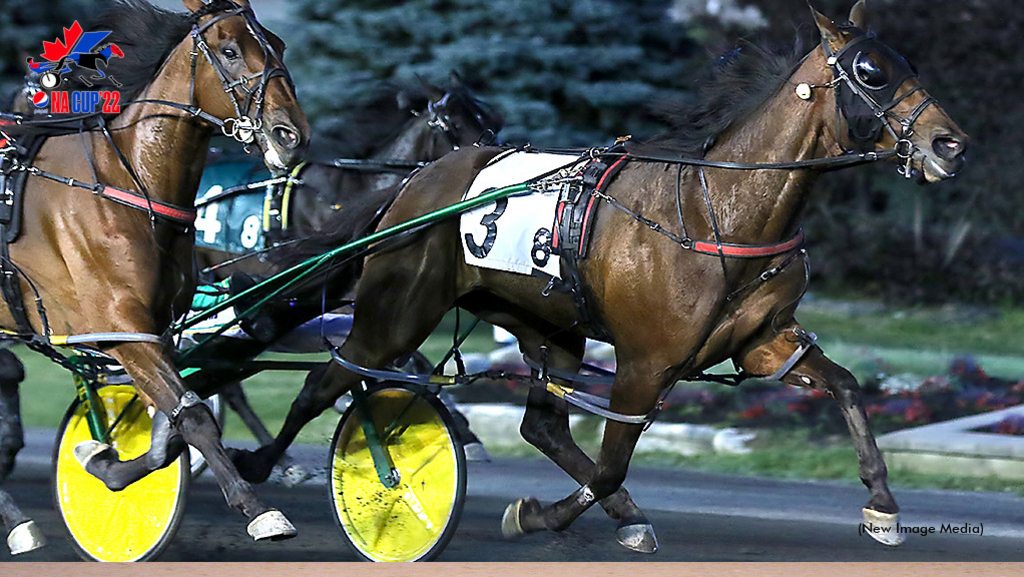 Remaining undefeated in 2022, TREACHEROUS DRAGON roared off cover in the stretch and held off a stubborn stablemate late in the mile to prevail in the 2022 $400,000 Fan Hanover Final on Saturday at Woodbine Mohawk Park.

Sent post-ward as the 6/5 choice, Treacherous Dragon was positioned in mid-pack early by driver Tim Tetrick as fellow elimination winner Silver Label left stoutly and pocketed Queen Of Success heading into the first turn. Sea Silk came to the outside from third after the :26.4 opening panel and cleared to the lead, but faced pressure shortly thereafter from Prohibition Legal as the half was reached in :55.

Sea Silk tried to repel the O’Brien Award winner but could not as Prohibition Legal poked a head in front through a 1:22 third station. Not able to drop down to the rail, Prohibition Legal fronted the field in the two path turning for home but then faced the fresh threat of TREACHEROUS DRAGON, who driver Tim Tetrick had positioned on MacDonald’s helmet throughout that overland journey. Tetrick right-lined TREACHEROUS DRAGON in the stretch and the filly responded willingly. Once Prohibition Legal was collared, TREACHEROUS DRAGON faced her own challenge in the form of stablemate Wickedly Innocent, but the favourite would no be denied and hit the wire a head the best in 1:50.2. Nick Gallucci trainees Prohibition Legal and Silver Label completed the top four.

“We got away from the gate and got really good cover. Like you said, it was picture perfect,” said Tetrick to Greg Blanchard after the win. “She reminds me a lot of her father…a lot of close photo finishes but she keeps putting her nose out and she knows what she’s doing. She’s really laid back and allows me a lot of options.”

TREACHEROUS DRAGON (CAPTAINTREACHEROUS – My Little Dragon) now sports a summary of 9-4-1 from 15 lifetime starts. The winner’s share of the purse lifted her earnings to $576,920 for owner Hot Lead Farm LLC of Allentown, N.J. Brett Pelling conditions.

“Brett’s done a great job with this filly, brought her along slow and he’s great at what he does,” continued Tetrick. “He sets them up great for the three-year-old year and he’s got this mare on point.”