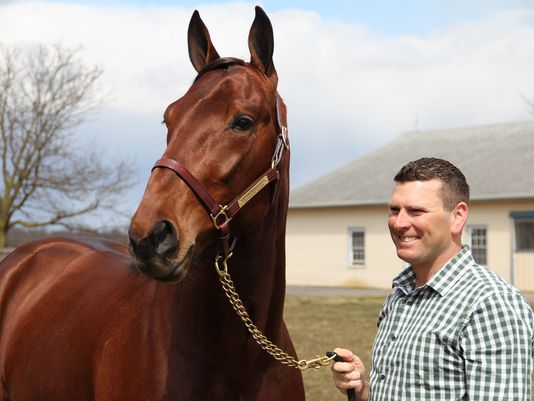 Nights like New Year’s Eve are usually memorable simply because they are New Year’s Eve – nights we anticipate and remember. In particular, this was a New Year’s Eve most of us were looking forward to – with all the challenges 2020 presented, we were all happy to see the back end of it and move on to a happier and healthier 2021. New Year’s Eve also took on special significance this year with Tabcorp Park Melton hosting 12 Group 1 Vicbred Finals showcasing the most talented colts, fillies, horses and mares that Australia has to offer with Harness Racing Victoria, Tabcorp Park and Sky Racing doing an exceptional job presenting all the night’s action to viewers.

But for Empire, it was truly a memorable night, as their stallions sired the winners of 4 of the 6 Vicbred Super Series GR1 Pacing Finals! CAPTAINTREACHEROUS, MODERN ART, SOMEBEACHSOMEWHERE and WESTERN TERROR each had a Group 1 winner in the 2YO Fillies, 4YO Entires & Geldings, the 3YO Fillies and 2YO Colts & Geldings divisions respectively.

KIMBLE, a talented son of WESTERN TERROR x I’m Wrongly Accused x Bettor’s Delight pulled off the upset of the night winning the 2YO Pacing Colts & Geldings GR1 $130,000 Final. While the two leaders and heavy favourites, Idyllic and Major Moth were engaged in a front-end speed duel, KIMBLE took advantage advancing from three back on the pegs to blast past the leaders to win by six metres. KIMBLE was bred and is raced by CJ & JM O’Connor and is trained and driven by Matthew Craven. “So proud of this fella” Craven said. “He has just continued to improve and improve all the way along. And tonight, when he went to the leaders at the top of the lane, he just pinned his ears back and had a full crack. That’s what we love about him.”

One of the most anticipated matches of the night was the $130,000 Vicbred 2YO Pacing Fillies division. It was TOUGH TILLY against her unbeaten stablemate Ladies In Red. But this night, TOUGH TILLY was much the best claiming victory while leading every step of the way. The daughter of CAPTAINTREACHEROUS x Beninjurd x Art Major races to promote awareness of the outstanding foundation she represents, EB Research Partnership Australia, and is named for Tilly Wilkes, one of the brave young ladies afflicted with this disease. Driver Kate Gath, dressed in the EB Research butterfly silks, was understandably emotional after her win. “Tilly proved that she is tough like her name says and she was just too good tonight” Gath said. “There is no race I have wanted to win more – for EB Research, Tilly and everyone suffering with EB – its’s just a great story and I’m so lucky to be a part of it.” This terrific filly is trained by Emma Stewart, was bred by Benstud Standardbreds and is raced by Benstud Standardbreds & CURE EB. TOUGH TILLY is from CAPTAINTREACHEROUS’ first Australian-sired crop of 41 two-year-old winners and gives her sire his third Australasian GR1 winner this season.

In the $130,000 3YO Pacing Fillies Final, MAAJIDA thrilled the audience with yet another sensational victory. It was back-to-back Vicbred victories for this brilliant 3-year-old daughter of SOMEBEACHSOMEWHERE x Arterial Way x Art Major who also captured the Vicbred Final and Filly of the Year honours last year at two. After sprinting up to the outside of the leader at the bell from post 8, MAAJIDA sat in the death until the top of the stretch when she pulled ahead to outstay her rivals to the wire in MR1:55.5. Driver Greg Sugars commented “She just keeps winning, that’s all you can ask for. She has a never-say-die attitude and just keeps getting the job done.” This was the 17th win – her 3rd at the GR1 level – all from 23 starts for MAAJIDA who is trained by Emma Stewart. She is raced by her owners/breeders the Johnson family from The Rock, NSW who were on hand to accept the trophy.

Every time LOCHINVAR ART steps foot on the racetrack, electricity fills the air and we have grown accustomed to watching his exciting performances. LOCHNIVAR ART is certainly no stranger to Tabcorp Park Melton as he holds multiple track records there over short and middle distances.  But tonight’s win in the $130,000 Vicbred 4YO Entires & Geldings Final performance was nothing short of spectacular as he pulled away from the field with a :26.9 third quarter and raced on to win convincingly by 30 metres! His trainer-driver David Moran said “tonight he probably felt the best he’s ever been. I thought he would be three or four lengths the winner, but he was 10 lengths the best.” From his 47 career starts, LOCHINVAR ART, a son of MODERN ART, has 25 wins, 14 seconds and 7 thirds to his credit, $986,556 in earnings and a record of 1:48.6. This was his fifth Group 1 victory and with this remarkable win, he has stamped himself as the best 4YO and older performer in Australia – full stop.

“Empire works extremely hard to choose the best stallions, with the best bloodlines and the best race careers who we feel will best cross with Australasian bloodmares to produce winners” said Empire principal David James. “It is so gratifying when your hard work pays off and New Year’s Eve was just an amazing night – wow! Not many farms can take credit for their stallions siring four Group 1 winners on a single race card.”

Besides the four Group 1 champions, the Empire influence was also evident on the broodmare side of two Vicbred trotting winners. Always Ready, who won the $100,000 4YO Trotting Entires & Geldings Final, is out of a mare by the Empire alumni YANKEE PACO and the winner of the $100,000 3YO Trotting Fillies Final, Majestic Belle, is out of the MODERN ART dam Avid.

Another interesting point regarding the Vicbred Finals – of the 12 Group 1 races, five of the winners were sired by stallions that are available in Australia via frozen semen – Andover Hall, Captaintreacherous, Ready Cash, Somebeachsomewhere and Used To Me.