Horse of the Year for Empire Stallions 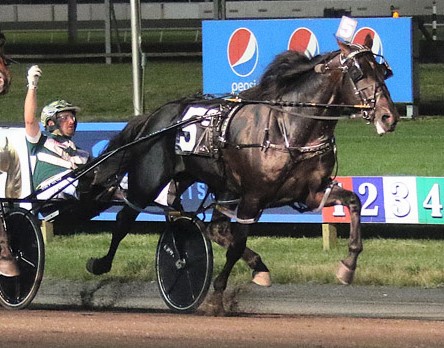 A magnificent dark bay individual standing 15.3 hands, TALL DARK STRANGER certainly lives up to his name
and is without question, one of the best-bred, best-performed stallions to ever be available in the Southern
Hemisphere.

In one of the deepest crops in recent history, TALL DARK STRANGER defeated the best of his generation on
his way to accumulating 19 wins and 2 seconds from 22 lifetime starts while banking over $2 million in
earnings.

Destined for greatness from birth, TALL DARK STRANGER was a $330,000 yearling purchase from the
Lexington Selected Sale and was considered to be the premier pacing colt offered in 2018.

TALL DARK STRANGER’s first foray into racing was in the Breakfast With The Babies trials at The
Meadowlands where he roared by the field at the top of the stretch with a :26.1 last quarter to win
impressively in 1:55.2.

In his first official race start at 2, TALL DARK STRANGER gave the world a glimpse of what was to come when
he took the lead at the half and never looked back posting a :25.4 last quarter to win in a very slick 1:51.3.

After two Ontario Sire Stakes Gold wins, TALL DARK STRANGER was headed to the $750,000 Metro Pace at
Woodbine – North America’s most prestigious two-year-old event. After winning his elimination in 1:50.1,
TALL DARK STRANGER won the Metro Final the following week establishing a new stakes record of 1:49.1 (a
new personal best) and increased his tally to 6 consecutive wins.

TALL DARK STRANGER concluded his juvenile season with two additional victories in the International
Stallion Stakes and the 2-Year-Old Breeders Crown Final for a total of 8 wins from 9 starts and earnings of
$717,514. For his efforts, he was voted 2-Year-Old Colt Pacer of the Year in both the United States and
Canada.

It was a jaw-dropping performance for TALL DARK STRANGER in his 3-year-old debut as he faced older foes
in a high-end conditioned pace and won in 1:47.4 to equal the fastest mile in the sport to date that year.
After sitting in a live cover flow past the half, Yannick Gingras, TALL DARK STRANGER’s regular pilot, swung
him three-wide midway through the far turn. TALL DARK STRANGER then exploded through the stretch
pacing his final quarter in :25.4 lowering his previous lifetime best by one-and-one fifth seconds.

Pedigree, conformation and athleticism – TALL DARK STRANGER obviously has them all. But one thing you
can’t tell from looking at a horse is whether or not he has what “it” takes to be a Champion. Nowhere was
TALL DARK STRANGER’s heart, grit and determination on better display than in The Meadowlands Pace – in
fact, the Final has been shortlisted as one of the greatest races of all time!

Advancing gradually off the first turn, TALL DARK STRANGER cleared for the lead with five-eighths to go and
controlled a :53.2 half. On the far turn, TALL DARK STRANGER faced a stout challenge from PAPI ROB
HANOVER, and the pair paced side-by-side to the three-quarters in 1:20.4. It was an epic battle to the wire
with TALL DARK STRANGER proving he was toughest of them all fighting back valiantly to win by a neck in
1:47.2. “He’s a fast horse, but he’s not just fast,” said Gingras. “He’s a great horse. He can do anything you
want, race him any way you decide to race him. He’s strong, he’s got a great gait, he’s got all the qualities
that make the difference between a fast horse and a great horse.”

It was a historic triumph for TALL DARK STRANGER in the $1 Million North America Cup. With a 1:48.4
elimination win tucked safely away in his pocket, TALL DARK STRANGER set the stage for another dazzling
performance – and dazzle he did with his brilliant 1:48.2 victory! With this win, TALL DARK STRANGER’s
name has been added to the history books as the only horse ever to win the Metro Pace and Breeders Crown
as a two-year-old and return to racing at three to capture both The Meadowlands Pace and the North
America Cup. “I rolled him to the three-quarters pretty hard but he just never quits.” Said Gingras after the
race. “He’s just a tremendous horse – the best pacing colt I’ve ever driven, there’s absolutely no doubt in my
mind.”

Continuing his winning form, TALL DARK STRANGER scored further victories in the Bluegrass Stakes and the
$239,500 Tattersalls Stakes as well as the $250,000 Kentucky Sires Stakes Final – all three contested at the
famed Red Mile in Lexington, Kentucky. He finished his 3-year-old season with 11 wins from 13 starts, 1
second and a record of 1:47.1. His earnings of $1,302,681 in 2020 led all harness horses in North America
that season.

TALL DARK STRANGER was trained by the 2020 USA Trainer of the Year Nancy Takter. “He’s just the
toughest horse ever,” Takter said. “I’m going to have to add smart to that, too, because he figured out what
this is all about. He knew that he was supposed to be first and made sure that he was first. Where ‘heart of a
champion’ is in the dictionary, TALL DARK STRANGER’s name and picture are right next to it.”

“We are thrilled to include TALL DARK STRANGER” in our line-up this coming season,” said David James,
principal of Empire Stallions. “He is everything we search for in a stallion – looks, performance, pedigree and
fertility. We are happy to continue our tradition of making the very best horses in the world available to
Australasian breeders and we believe TALL DARK STRANGER will make a very big impact on the future racing
scene.”

TALL DARK STRANGER is available via frozen semen and the TALL DARK STRANGER Syndicate has limited his
book to 125 mares in Australia/New Zealand combined. Please call Donna Egan/David James/Les Joslin on 03
5796 2122 for additional details, booking applications or pedigree matches and check out his race videos on
www.empirestallions.com.