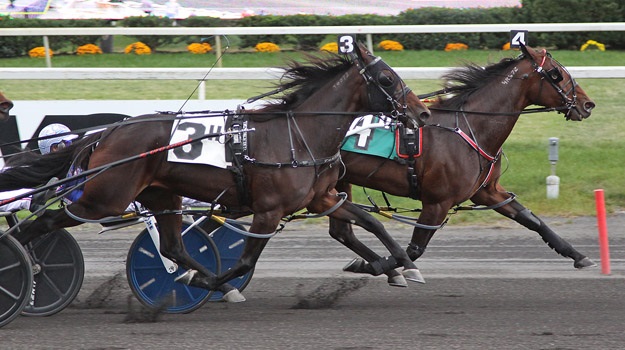 Rocknificent (CAPTAINTREACHEROUS) picked up the most significant victory of her career so far by winning Saturday afternoon’s $330,000 Breeders Crown Mare Pace final at the Meadowlands in 1:49, defeating top-ranked Lyons Sentinel in the process.

Supplemental entrant Racine Bell (Jason Bartlett) blasted to the front from post six, but Rocknificent (Scott Zeron) tipped out of the pocket and hit the lead past the 27 second opening quarter. Rocknificent then got to the half in 55 1/5, with Lyons Sentinel (CAPTAINTREACHEROUS) stepping out first-over from fourth just after that station.

Just like in the elimination last week, Lyons Sentinel didn’t advance quickly while uncovered on the final bend, and despite Tim Tetrick asking her, Lyons Sentinel could only get into the third spot as Rocknificent reached three-quarters in 1:22 3/5 and turned for home first.

In the lane Lyons Sentinel hit a better gear and began to close in, but Rocknificent had the jump and wasn’t going to be caught. Rocknificent got to the finish line half a length to the good, with Lyons Sentinel, Peaky Sneaky (Dexter Dunn), Racine Bell, and JK First Lady (David Miller) rounding out the top five.

“Honestly, I first want to congratulate the horse. She has been amazing for me all year. Driving horses sometimes isn’t easy, but driving her is really robotic. She gives everything every time,” said Zeron. “She’s super nice and professional, and she lets me do that with her, where I’m able to start her up leaving and then just kind of get some soft fractions. It really became a great stretch race.

“We’ve been in that situation before, and it just seems like Lyons Sentinel is really tough to fend off. Today we got the upper hand. I don’t put her on the front a whole lot, so when I do, she’s usually pretty good.”

A 4-year-old Captaintreacherous mare, Rocknificent is trained by Linda Toscano for owners Enviro Stables Ltd., South Mountain Stables, and Little E LLC. This was her 15th lifetime victory, and she has now pocketed $1,133,662. She paid $7.40 to win as the 5-2 second choice.

“She does what she does because [Scott] taught her to do that. He’s done a great job with her,” remarked Toscano. “She’s relaxed, she shows up every single week, and she gives us a great effort. I’m tickled that she got a big one.

“I’d like to take credit for that, but that’s just her. She’s just a pleasure. She’s great-gaited, she’s quick off the gate, and she’s two fingers to come back to you.”

Co-owner Dan Baer of South Mountain Stables added, “It’s fantastic, but it’s even better having a Hall of Fame trainer training my horse, and probably a soon to be Hall of Famer driver in Scotty Zeron. They’ve been fantastic. I do my part. I pay the bills, and that’s about all I do. They do all the work, and they’ve been wonderful.

“That’s the job that Linda has done with her. It’s amazing how she can leave all the time and still be as consistent as she is. I have to give it to her, she’s a fantastic horse. She gives me heart palpitations every time she races, but it’s wonderful, and today’s fantastic.”

In regards to Lyons Sentinel, her trainer Jim King Jr. said, “I thought she went another outstanding race. The trip beat her. First-over for a long time off a slow half for the bunch. We’re not ashamed of her, that’s for sure. That was a very good mile she went. She’s got the TVG left and then hopefully we’ll start over.

“As far as I was concerned, [Rocknificent] was a threat every time I raced with her. She’s true, she’s good gaited, she’s quick. She can get herself into the right spot, and it doesn’t take away from her when he has to step her right out of the gate. It doesn’t get her so cranked up that he can’t do anything with her, and it doesn’t take away from her at the end. That’s a pretty good quality.”