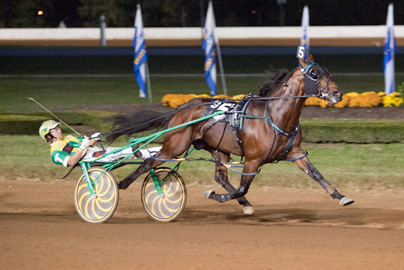 A 3YO double for CAPTAINTREACHEROUS this week, with Captain Pins taking a 15.8m win at Maryborough (below) and Captain Braveheart in 1:56.0 at Tabcorp Park Menangle.

A local double also for HESTON BLUE CHIP with wins for 2YO Jalaneel (Penrith) and 3YO Miss Magdalena (Redcliffe).

Of our past sires, FOUR STARZZZ SHARK was represented by Mobster and Non Passare, WELL SAID by Speak Easy, SOMEBEACHSOMEWHERE by Infinity Beach, Bondi Shake, Braebeach & Gilty By The Beach, and WESTERN TERROR by The Narrator & Arma Veyron.