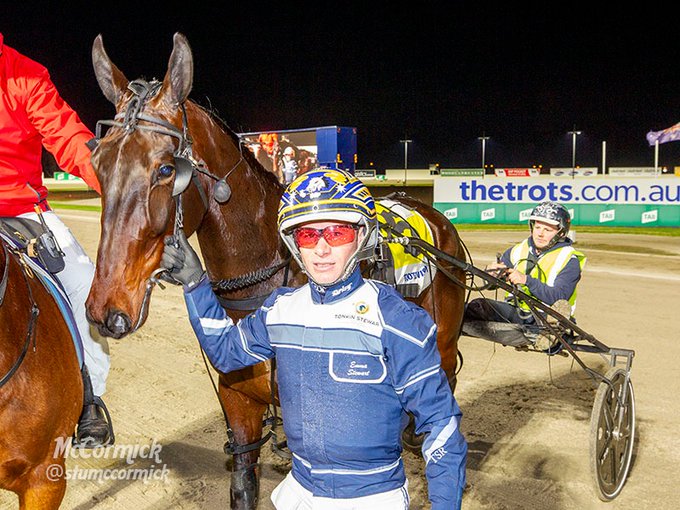 And what a weekend it was for our dominant sire, CAPTAINTREACHEROUS! Nine winners across three days, and three of them GROUP 1 wins…

The Breeders Crown Championships at Tabcorp Park Melton were a highlight of the season with CAPTAIN youngsters dominating. The GR1 2YO Colts & Geldings Final was a trifecta for CAPTAIN, won by School Captain in 1:53.1 from Perfect Class and The Lost Storm. Star filly Encipher almost reached the half-million stakes mark when she took the GR1 3YO Fillies Final, and we’re still reeling from that track record-smashing 28m win by Captain Ravishing (1:51.1) in the GR1 3YO Colts & Geldings Final.

Also hot in the speed stakes were Hot And Treacherous (1:55.4 at Alexandra Park), Captain Dorian (1:55.4 and his second consecutive win, at Newcastle) and Its All About Faith (1:53.2 at Tabcorp Park Menangle) and Majic Moment (1:55.5 at Albion Park). A winner by 18m at Newcastle was 3YO filly Captain Of Speed and on St Arnaud Cup day, Captain Pins added a fifth victory to his record.

Solid representation from our past sires too, BETTING LINE‘s Iylac Pakaria took the Evicus Final at Hobart, SOMEBEACHSOMEWHERE‘s Act Now claimed the GR2 Breeders Crown 4YO E&G Championship while Idyllic took the GR3 Breeders Crown Graduate Cup. Serengeti Sunrise was also a winner for BEACH and for BLISSFULL HALL, Blissfull Donna was successful. WELL SAID scored a treble with Sweetly Spoken, Triedtotellya and Young Rooster all in the money this weekend.